Heating and cooling in Macedonia

Macedonia has some 550,000 dwellings. The average energy intensity of the existing Macedonian building stock is roughly estimated at 220 kWh/m²/year. Electricity is the dominating heating source: In 2011, 52% of households’ total final consumption was made up by electricity. Biomass e.g. fuel wood has the second biggest share, 31%, whereas heat provided by District Heating (DH) services only 6.7% and oil products 8%. This is a reflection of the findings in a household survey1, according to which 74% of all households are heated by stoves using solid fuels and 14% are heated by stoves using electricity, whereas only 6.2% have central heating (based on DH), and 5.5% have central heating (with private installations).
District heating only exist in three locations in Macedonia: Skopje, Bitola and Kamenica. The last two systems have been out of operation for several years. Only the DH network in Skopje is of important magnitude. Deliveries to the end users are measured at sub-stations or individual houses. Within apartment blocks the heating costs are divided according to heated area of the individual apartments. There is no individual metering per household. The system was expanded during 1990-2000 because many new apartment blocks were constructed and suitable for DH connections. In recent years the connections to the DH system have slowed down and even decreased. The Skopje DH system is characterised by outdated boilers (for fuel oil and natural gas) and considerable technical losses in distribution. The new cogeneration plants are of a better quality. There are plans to convert two electricity production plants to cogeneration plants and utilise the heat for district heating in the City of Bitola.
To date, almost two decades after the introduction of natural gas, it has not been possible for Macedonia to achieve significant development and expansion in the use of gas, not even in the greater Skopje area, which – owing to its population density and large industrial base – would represent one of the most likely geographical candidates for increasing the use of gas. Nevertheless, according to the gasification plan, gas consumption in the households, tertiary and industry sectors combined is projected to increase substantially, as the new gas network is projected to expand into more than 50 municipalities.
Small renewable district heating grids, as well as district cooling systems do not exist in the country, and are not explicitly addressed in the relevant strategic and planning documents. There is a wide spectrum of barriers for deployment of these technologies - starting from lack of technical knowledge and capacities, through enabling legislative/regulatory frameworks and financing schemes for mobilising investments, to lack of capacity of the local governments for planning and designing such projects. 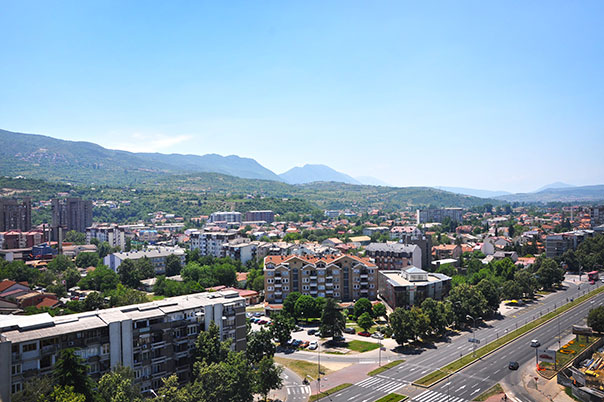 The municipality of Karposh (population: 60,000; surface area 35 km2) is located in the northwest Macedonia, central-west part of the City of Skopje. It is one of the ten Skopje municipalities with 12 urban and 2 rural units, and is mostly covered by the Skopje DH network.
Karposh is the only municipality in Macedonia which has subsidised the energy efficiency in buildings and the renewable energy use for heating and cooling, covering 15% and 20% of the communal tax for the respective buildings. Out of 244 buildings, constructed over the period 2012-2015, 117 buildings are of A+, A and B classes, and 68 of them have installed heat pumps for heating and cooling. Furthermore, as per the Development Strategy until 2019 and Energy Efficiency Programs (2008-2012 and 2013-2016), all the reconstructed buildings under the municipal jurisdiction (in total 20 schools and kindergartens, 14 fully reconstructed) should replace the oil boilers with renewable energy based heating by the end of 2018. So far, 3 buildings have installed renewable energy based heating – 2 with heat pumps and 1 with biomass wood chips (under construction). Also, under the Program for renovation of the facades of the collective housing buildings (166 buildings by 2019), facades of 13 buildings have been reconstructed with thermal insulation and new carpentry.
Karposh, as the Macedonian pioneering municipality in the area of local sustainable energy development, has a strong interest to assess the technical, non-technical and economic aspects and to promote the concept of small district heating and cooling systems at selected sites. Those sites could include some of the settlements that are not connected to the DH network and contain hundreds of houses which currently use electricity or biomass for heating, i.e. Zhdanec and Bardovci, and/or the military building complex “Ilinden”, which has high energy consumption for heating and sanitary hot water, and extremely high energy expenses.